A Long(er) Analysis of Zone Versus Macros Calories

A couple of years ago, I wrote a short piece about hidden calories on the Zone Diet® versus macronutrient (“macros”) tracking. I concluded that fat grams in protein sources (i.e., hidden calories) was the primary variable for the different caloric intake when comparing Zone blocks to one’s total macros.

More recently, I wanted a better method to estimate conversions between block prescriptions and macros. While this should be simple math, the calories didn’t add up (literally) when comparing macro and block prescriptions for the same person. I decided to re-evaluate hidden calories on the Zone, and specifically, how does their error compound across one’s entire day of blocks? Turns out, you can’t readily convert someone’s total block number to specific macros. Or you can’t with any real accuracy (unless of course, you have their actual diet log, in which case you already have their macros).

Turns out, you can’t readily convert someone’s total block number to specific macros. Or you can’t with any real accuracy. 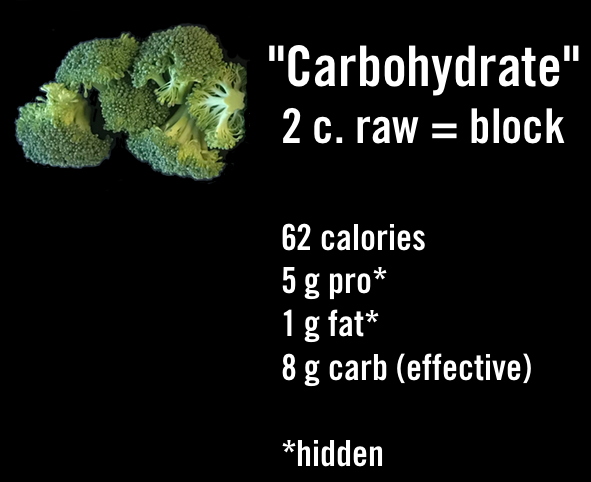 There is a substantial error in the precision of one’s total caloric intake on the Zone due to these hidden calories. By my estimate, hidden calories add an average of 54 calories/block. This ends up being an additional ~650 calories for 12 blocks and ~1,080 calories for 20 blocks. But this is an average: the actual number of hidden calories is dependent on one’s food choices. Anecdotally, I know people who have thrived on the Zone, others who were starving, and others who couldn’t lose weight. This disparity may in part be explained by their food choices which resulted in varying caloric loads at each number of total blocks. The Zone can be a great diet approach despite its lack of precision, which I will detail later, but first math.

This means, without hidden calories, there are 91 calories in a Zone block:

I then compared the calories in a Zone block to the actual calories in that food serving. For example, one block of protein in the Zone is assumed to contain:

Or 41.5 calories/block of protein. Then I looked up the actual calories in protein blocks, for example:

In a 4-block meal, the person eating chicken is net negative 30 calories and the person eating cheddar-cheese is net positive 290 calories! And that’s just based on the protein in the meal. I looked at six different protein, carbohydrate, and fat foods to determine the average hidden calories per block:

Interestingly, however, the range for 12 blocks is 1,008 calories at the low end (on chicken breast, bread and avocado only) or close to 3,000 calories on the high end (on cheddar cheese, commercially-prepared hummus, and heavy cream only)! That is a huge disparity for a set number of blocks that only compounds at higher block prescriptions. Now, it is unlikely that someone is eating only three foods perfectly Zoned for eternity. However, trends will result in significant caloric disparities: the individual eating mostly chicken breast is eating a lot fewer calories than a vegetarian eating mostly cheese even on the same block prescription.

Here’s why none of this matters: we ultimately eat about the same 20 foods on repeat (2). This means we will find an average baseline number of calories on the Zone unique to us, whether it is 1,008 or 1,700. From there, the individual can determine if it is working for them in relation to health, performance, and body composition goals and can tweak as needed. Even with some variation in total calories day-to-day, it is going to be significantly more precise (and consistent) than not weighing and measuring at all. For many people, this level of precision will be “good enough.”

Even with some variation in total calories day-to-day, blocks are going to be significantly more precise (and consistent) than not weighing and measuring at all

That being said, CrossFit and the subsequent greater functional fitness movement has changed what “normal” is not only in terms of capacity but also physique. I’ve worked with many females who in any other circle would be considered lean but are interested in “leaning out” as defined abs are commonplace in CrossFit. This type of physique, formerly limited to bodybuilders, comes from a high degree of precision in the diet (with genetics and workout volume also playing a role). A swing of a few hundred calories a day will stall weight loss for the already-lean; tracking macros may be the level of precision needed to reach certain goals.

The hidden calories in the Zone do change its precision and may explain why not everyone achieves their desired goals with it. Even without precision, however, it can still bring a balanced macronutrient approach and consistency to the diet, which can be “good enough” for many people.

This site uses Akismet to reduce spam. Learn how your comment data is processed.